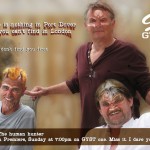 After our recent Friday 13th trip to Port Dover, the edible Nikki and I went to London to visit my family. This was the first time they had met Nikki, and as we had not showered for two days (camping!) we were not at our best, sore, sleepy and sunburned as we were. Nonetheless, the welcome we received from Andy and Jean (brother and sister-in-law) was warm and wonderful. I haven’t seen the family for around three years so there was some catch up to be done. Odd, really. I moved 3.5 thousand miles to Ontario to be near them. Bro Tony couldn’t make it over which was a shame but we can do it another time. T’other bro Vyvyan joined us later for beers and the night was spent giggling like schoolkids by/in/around the pool. Next morning, bacon and egg sandwich courtesy of Jean before heading back home, changing and unpacking, then heading out again to Niagara for the Grand Cirque. That’s another story. Nutshell: go see it.

Just wanted to say it was great seeing the guys after so long. Must do it again soon, and Andy, I found the soap.